What am I to say with regard to following-

The examiners for the Intermediate Education Board examination ask whether there is any use in their going over. Shall I postpone all examinations until further instructions. Chadfield Incorp Society of Musicians 19 Berners St Ldn W,

There is a band of rebels in Saucerstown between Swords & Garristown. Theyare the same party who took Swords Barrack & Donabate on Tuesday & Wednesday. It is a great pity they cannot be rounded up.
Phoned to Depot 11-46p.m 28\4 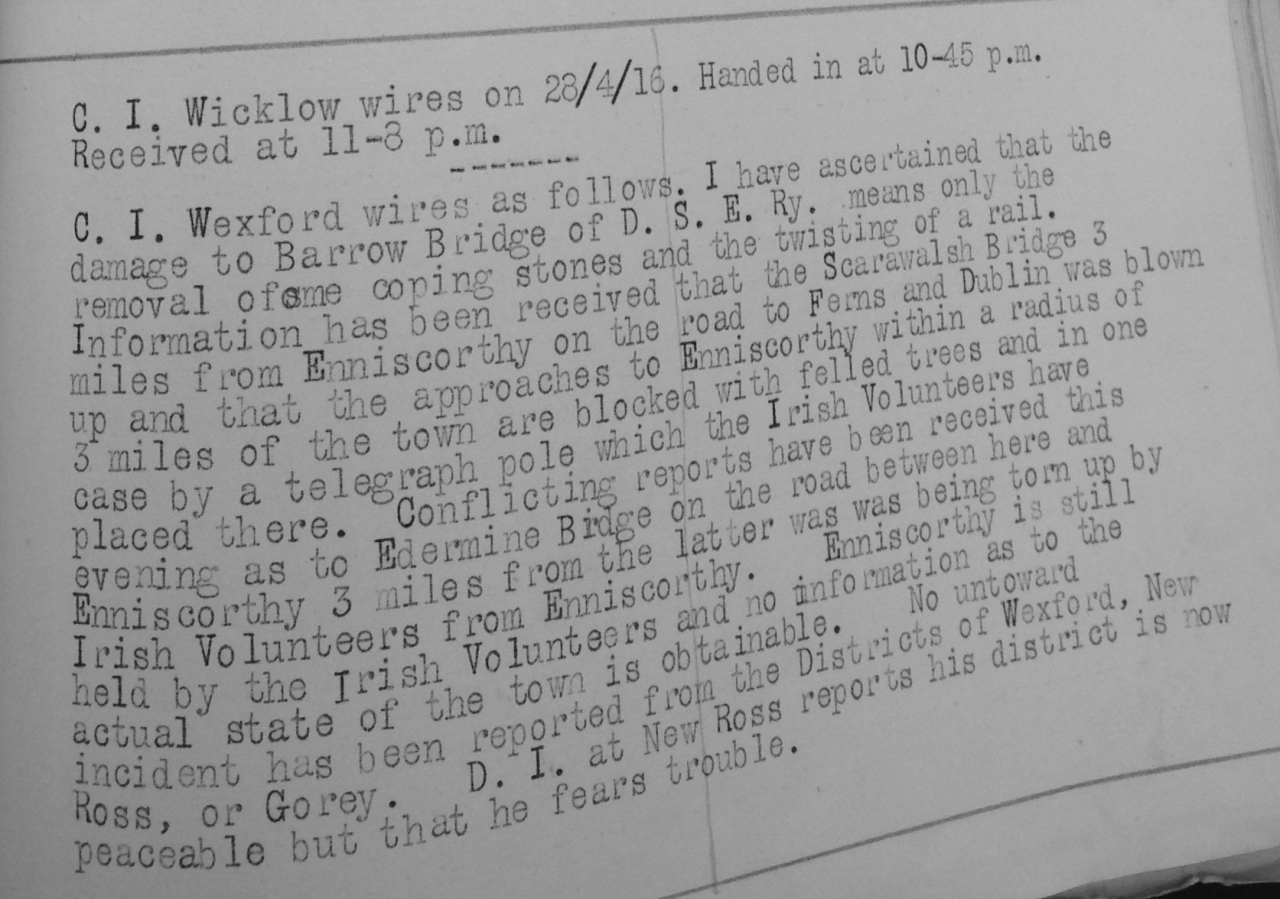 C.I. Wexford wires as follows. I have ascertained that the damage to Barrow Bridge of D.S.E. Ry. means only the removal of some coping stones and the twisting of a rail. Information has been received that the Scarawalsh Bridge 3 miles from Enniscorthy on the road to Ferns and Dublin was blown up and that the approaches to Enniscorthy within a radius of 3 miles of the town are blocked with felled trees and in one case by a telegraph pole which the Irish Volunteers have placed there. Conflicting reports have been received this evening as to Edermine Bridge on the road between here and Enniscorthy 3 miles from the latter was being torn up by Irish Volunteers from Enniscorthy. Enniscorthy is still held by the Irish Volunteers and no information as to the actual state of the town is obtainable. No untoward incident has been reported from the Districts of Wexford, New Ross, or Gorey. D.I. at New Ross reports his district is now peaceable but that he fears trouble. 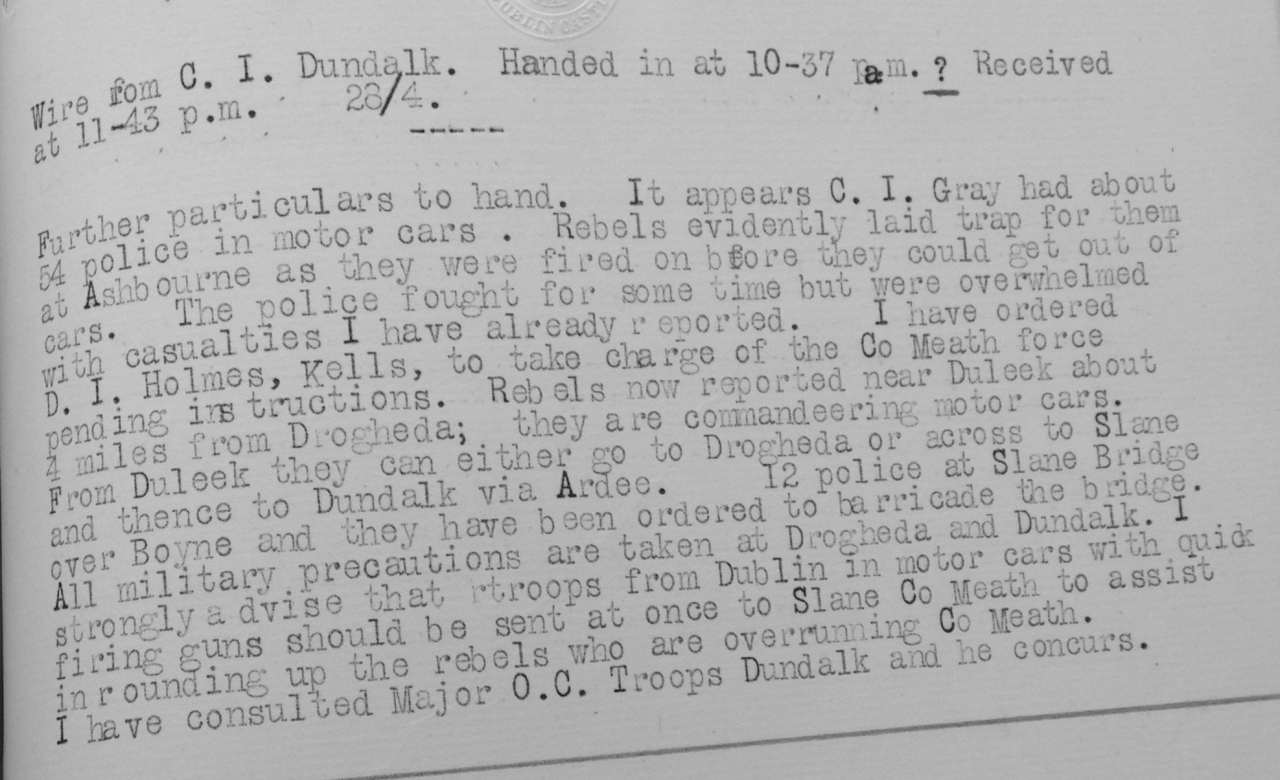 Further particulars are to hand. It appears C.I. Gray had about 54 police in motor cars. Rebels evidently laid trap for them at Ashbourne as they were fired on before they could get out of cars. The police fought for some time but were overwhelmed with casualties I have already reported. I have ordered D.I. Holmes, Kells, to take charge of the Co Meath force pending instructions. Rebels now reported near Duleek about 4 miles from Drogheda; they are commandeering motor cars. From Duleek they can either go to Drogheda or across to Slane and thence to Dundalk via Ardee. 12 police at Slane Bridge over Boyne and they have been ordered to barricade the bridge. All military precautions are taken at Drogheda and Dundalk. I strongly advise that troops from Dublin in motor cars with quid firing guns should  be sent at once to Slane Co Meath to assist in rounding up the rebels who are overrunning Co Meath. I have consulted Major O.C. Troops Dundalk and he concurs.

From Supt C To Chief Supt

Sniping by military was very brisk about an hour ago. I went up Talbot Street with a military escort and I believe Hickeys the Drapers is on fire. I have no news from Sackville Street. I sent out twelve men to assist the military at 1pm to-day four of them have returned at present the others are alright. I have two men on plain clothes duty at Amiens Street.

Sent to Under Secretary

Pte Fred Wiggette no. 4866 2nd J8 Notts & Derby Regt Royal Hospital was found by Assistant master SD Union at 8am 28th 4 16 holding a post assigned to him at union bakehouse where he was posted at 7pm 27 4 16 where his Battn retired from the union grounds, he was sheltered by the Assistant Master and afterwards conveyed by his directions in a coffin to the back gate at Rialto where he was handed over to military guards at 9pm and conveyed to his Battn as above.

Military force arrived in Galway. In Wexford Enniscorthy still held strongly be rebels. At Ashbourne 15 miles north west of Dublin police surrounded by rebel force and District Inspector Sergeant and 7 men killed County Inspector and 14 men wounded. Some unrest in North of County. Dublin and Louth and a few telegraph wires cut in Limerick. In Clare rebel meeting has been announced and will be prohibited if military can provide troops to prevent it. Have no authentic information of situation in Dublin or of general disposition of troops.