6.50pm Chief Comm informs Col Halls that Wallis stables are at Empress Placec Heitons at South Gloucester St and toward St Tedcatly in Erne Street near Wkow which is in the hands of the rebels.

6.40pm The Recorder phones to Chief Commnr that when on his way to the castle he was stopped by the Military who he states would not see to his pass. He phoned from his residence.

4.20pm Information to Police at Mountjoy that despatches were delivered on the River at the house 13 St Clements Road Drumcondra by women on bicycles relative to Insurrection.

The house is occupied by Mrs Kearns who has 4 sons Rebels.

6.45pm Information at Kilmainham Station that at 11am she saw 2 paupers of SD Union take a large sack of bread from the Union into Burkes public house opposite the Union for the use she believes of Rebels. Shots were fired from the public house during the night and it is thought the Rebels are hiding there. They are also believed to be in Hardimans close by.

From Chief Supt D.M.P. To All Supts

Please send here at 10am tomorrow. 5 of the best men in plain clothes from your divisions who have the best knowledge of Sinn Feiners and Citizen Army.

Another Constable shot near Firies. One of the 2 seriously injured. The other apparently not. 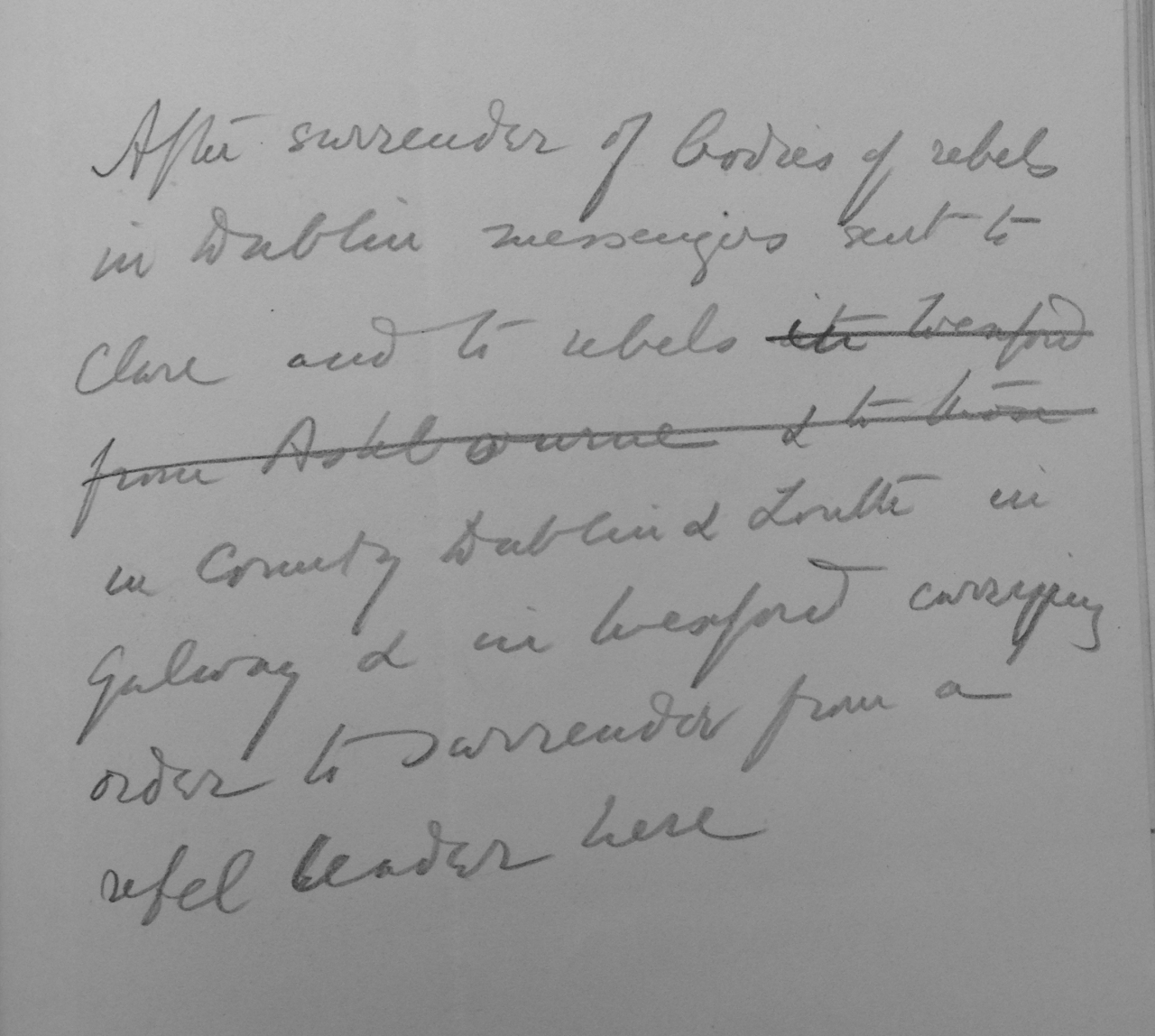 As Secretary of the Post Office, Ireland, I have to submit the following urgent requests:-

On the surrender we marched back through Henry Street to O’Connell St. We were lined up in single file with our backs on the Gresham Hotel where we grounded arms. After some tithe a small body of men from the Four Courts garrison under Commandant Ned Daly entered O’Connell St. from Parnell Street marched down and faced us across the street. The British General roared: “Who is in charge of this party?” Two heels clicked. Ned Daly took two paces forward and said in a loud voice: “I am”. We were then marched into the plot of ground opposite the Rotunda and remained in the open all night.

On Sunday morning we were marched to Richmond Barracks and, after a meal of dog biscuits and bully beef, we were marched to the boat that night. We were taken to Stafford Prison. After some time I was transferred to Frongoch and released at Christmas 1916.

1916 Live
Create a free website or blog at WordPress.com.